Barley is a common economic shellfish in the coastal areas of China. It is commonly known as alfalfa and ink pupa. Its meat is delicious and has a certain medicinal value. It has broad breeding prospects along the beach. From April to October of this year, Guandong Salt Factory of Jiangsu Province carried out the experiment of planting seedlings of Qinglan, and achieved great success. Now the technology is introduced to everyone:
1. The size of the Jianyu Miaochi built pool is 7 meters, 5 meters and 1.2 meters.
Second, the choice of pro-shellfish should be selective gland full, complete shell, clean, shell length â‰¥ 3 cm as pro-shell individual.
Third, the water quality and bait seawater after two sand filters, the specific gravity control between 1.017 ~ 1.020. The bait is generally a single-celled algae, mainly forked algae, chlorella, and flat algae.
Four, nursery method
1. The oxytocin will be cleaned and dried after being dried for 5 hours, placed in a nursery pond to shield the light and increase the air volume. The water temperature is controlled between 26Â°C and 30Â°C. The success rate of oxytocin production is above 95%.
2. After selecting and cultivating the oxytocin, remove the pro-scallops as soon as possible, and use the 80-mesh sieve to remove the fine foam and pro-litter waste from the water surface. Cushion culture is conducted. The fertilization rate can reach 85% to 92%. The hatching density is controlled at 30 ml/ml. Between ~ 35 capsules. After fertilized eggs have developed into D-shaped larvae, the upper layer of healthy, neat, and lively larvae is pulled out with a 300-mesh sieve as soon as possible, and placed in a separately prepared nursery pond.
3. The larvae cultivate higher water temperature in summer, and the larval cultivation density should be controlled at 7 to 11 capsules per ml. During the development of the D-shaped larvae, fork algae were fed. At the later stage, the algae, chlorella and Platymonas were mixed and fed at a feeding density of 50,000 to 100,000 per ml. Change the water twice a day, changing the pool water by 50% each time. Microlarging is applied to the larvae to evenly distribute the bait and larvae to facilitate the growth and development of the larvae.
4. Attachment metamorphosis Prepare attachment bases before metamorphosis of larvae. The filtered sea mud was screened with a 250-mesh sieve and placed evenly in the nursery pond to form a soft mud sediment with a thickness of 1 mm to 2 mm and fresh seawater with a depth of 1 m to 1.2 m. After the water was completely clarified, the larvae were collected on a 200-mesh sieve and transferred to an attachment pool. Change the water 2 times in the early days, change 50% of the water every time, after 5 days to 7 days, the adhesion rate can reach 85%.
5. After the juveniles were raised in the newborn foot, the density of their cultivation gradually decreased as the individuals grew. Replace attachments every 5 days. Each time the pool is poured, use different mesh sieves to smash lightly, remove the attachments from the surface of the shells, remove debris and dead shells, and then separate juveniles of different sizes and divide them into different pools. When mixed with single-celled algae, they were fed three times daily and the density of algae was maintained at 80,000 to 100,000 per milliliter.
6. Emergence According to the requirements of the breeding, the juveniles were collected using a 80-mesh sieve, packed in a wet cloth bag, weighed and placed in a container for transport.
V. Experimental conclusions In this experiment, a total of 3 invocations were made, and 130 kilograms of juveniles were raised with 750 kg of pro-shellfish and good economic and social benefits were achieved. Practice shows:
1. The selection of algae varieties that are resistant to high temperatures and rapid reproduction is the key to success. Since the breeding season of barley is from July to August, if algae cannot resist heat and decline during this period, it will inevitably affect the normal production.
2. The use of golden algae in the early development of juveniles, the use of golden algae, chlorella and flat algae in the middle and later stages of mixed feeding, is conducive to the growth and development of juveniles.
3. In the nursery pond, sea mud with a relatively small viscosity should be selected. Due to the stickiness of the mud in the experimental site, the phenomenon of adhesion occurred within about 3 days in the pool. When replacing the attachment base, it was found that the seagrass and seaweed were difficult to separate, and the problem was successfully solved after replacing the slime sea mud.

There are many problems in traditional Goji planting, such as non-standard planting, unstable quality, Goji low safety level, depending too much on chemical pesticide and fertilizer, polluting air and groundwater, delay ripening and integrating in corresponding cultivation techniques, low penetration of new technologies and extensive management. Our company began planting organic Goji berry from 2003, and has invested more than RMB 36 million. Using the mode of transferring land and subcontracting, we have established more than 75 hundred acres of organic Goji base in Zhongning, Haiyuan, Guyuan and Delingha, under the Good Agricultural Practices(GAP). High standard design, scientific management, standardize manufacture as organic standard from organic base choosing, plant breeding, planting, fertilizing, diseases and insect pests controlling, picking, to transportation, further processing, sale. We apply quality traceability system, mechanized farming, standardized management, proceeding operation, stoving and processing together.

Our company is the only enterprise internationally recognized organic food certifications by NOP, EU, JAS and China, is the birthplace of Chinese organic Goji berry. 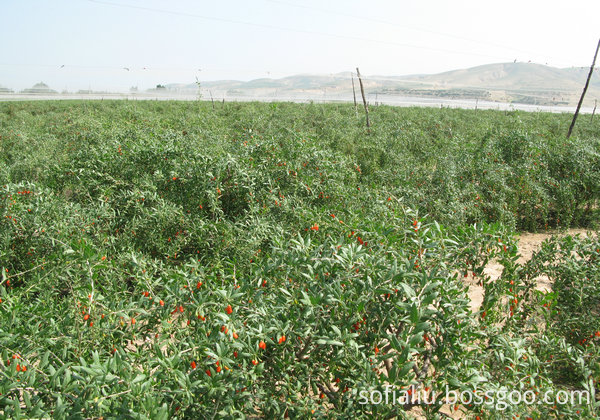 Wolfberry Company is the birthplace of Chinese organic Goji, is the only company planting organic Goji. Now we have more than 75 hundred acres of Goji planting Base, which are under organic planting standard, without using chemical pesticide and fertilizer. Their production mode is ecological, natural and safe. Products reach the North America, European Union and Japanese level including requirements in pesticide residue, chemical substances residue, residue of veterinary drug, which guarantee the quality from production source. Our base and plant have internationally/nationally recognized organic food certifications such as NOP, EU and JAS.

Please feel free to leave us message.
Any inquiry would be replied within 2 hours on working days! 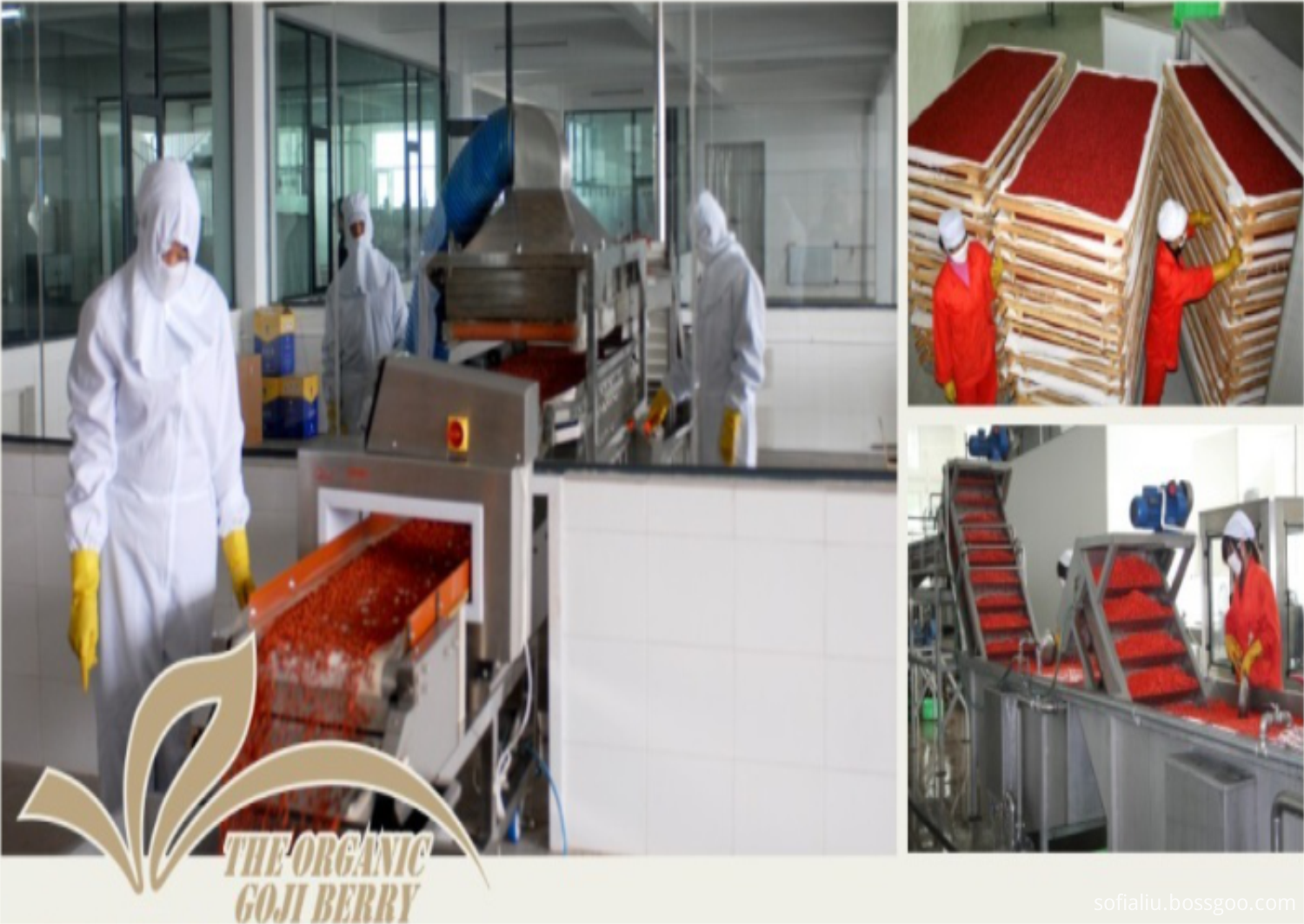