Cycadin Cy is another type of fluorophore, including green Cy2, yellow-red Cy3, red Cy5, near-infrared Cy5.5 and other fluorescent dyes. Due to the slight difference in structure, the absorption and emission wavelengths are also different. For example, the Cy2 coupling group has an excitation wavelength of 492 nm and emits green visible light having a wavelength of 510 nm. Cy2 and FITC use the same filter, but avoid using a seal containing phosphorylated phenylenediamine, because this anti-quenching agent reacts with Cy2, resulting in weak fluorescence and diffusion after storage of the stained sheet. Cy3 and Cy5 are brighter, more stable, and have a weaker background than other fluorophore probes. The maximum wavelength of the excitation light of the Cy3 coupling group is 550 nm, and the strongest emission light is 570 nm. Since the excitation and emission wavelengths are very close to TRITC, in fluorescence microscopy, the same filter as TRITC can be used. Cy5 can be used in multi-label experiments with many other fluorophores. Since its maximum emission wavelength is 670 nm, Cy5 is difficult to observe with the naked eye, and it cannot be excited by a mercury lamp. Confocal microscopy with suitable excitation and far-infrared detectors is typically used when viewing Cy5. Below we look at a comparison of a set of fluorescent secondary antibodies: 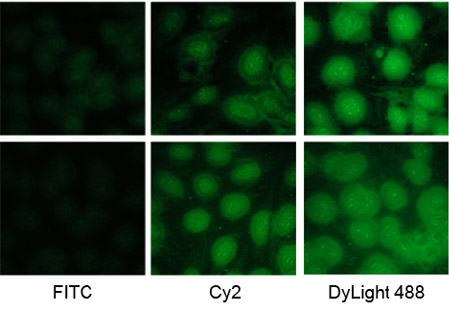 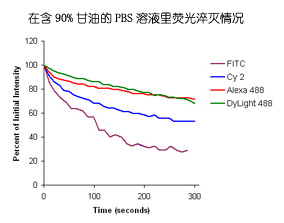 We know that the green fluorescence intensity of FITC is already very bright, but from the top left, it is still weaker than Cy2, while Dylight 488 is better; the upper right is different fluorophores containing 90% glycerol. The fluorescence quenching condition in PBS is visible from the figure. The quenching of FITC is very fast, followed by Cy2, while Dylight 488 and Alexa 488 have good light stability. Let's look at another set of data about red fluorescence:

As can be seen from the top left, Dylight 594 is more fluorescent than Alexa 594 and Texas Red, and Dylight 594 is also very specific; likewise, the upper right panel shows that Dylight 594 is also excellent in light stability. So what kind of fluorophore is Dylight? Dylight is a new fluorophore in terms of structure, function and application. Compared to traditional fluorophores, Dylight has a relatively small molecular weight, so more Dylight can be labeled on one macromolecule, while a single Dylight fluorescence The group has stronger fluorescence intensity and better specificity; Dylight is more stable to light, which means it is more resistant to quenching, unlike FITC, which cannot capture fluorescent images in time due to rapid quenching. Another advantage of Dylight is that it is very comprehensive. For example, when doing three-label, in addition to the common red and green fluorescence, blue fluorescence should be the third choice, and Dylight 405 is blue. Dylight 488 is green and completely replaces FITC; Dylight 549 is completely replaced by Cy3 and Rhodamin; Dylight 594 is replaced by Texas Red; Dylight 633 and Dylight 649 are stronger red fluorescence; in addition, Dylight has an Odyssey system. Near-infrared and far-infrared secondary antibodies are Dylight 680 and Dylight 800, respectively.